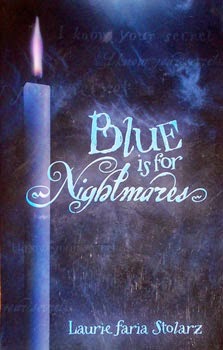 Autorin: Laurie Faria Stolarz
Taschenbuch: 312 Seiten
Verlag: Llewellyn
Pub; Auflage: Deluxe Spellboo. (November 2003)
Genre: Jugendbuch / Thriller (Young Adult Fiction)
Sprache: Englisch
Originaltitel: Blue is for Nightmares
Vom Hersteller empfohlenes Alter: 12
ISBN-10: 0738703915
ISBN-13: 978-0738703916
Preis: 8,45 € / $ 9.95Teil einer Reihe? Ja, 1. Teil
(Blue is for Nightmares #1)
Summary: (Source: Spine)
„I Know Your Secret…“
Stacey
Brown has lots of secrets – her crush on her best friend Drea’s boyfriend, the
spells she casts, and the nightmares that come true. Now she’s dreaming about
Drea and a psycho stalker. Saving Drea will take all the magic and courage
Stacey’s got. And everyone’s secrets will have to come out.
My Opinion:
“Blue is
for Nightmares“  by Laurie Faria Stolarz
is the first book of the teen-thriller series “The Blue is for Nightmares
Collection”. The book is filled with mystery and magic. The author also created
a wonderful suspense – you never really can guess who’s behind everything till
the end. I couldn’t put the book down. It’s an engrossing, good-time page
turner which involves the reader and makes you want to answer the mysterious
happenings.
Stacey
Brown, the protagonist, is a lovely character. She is supposed to be a normal
girl and it’s her junior year at boarding school. But she’s got some secrets.
She practices Wicca, has nightmares and wets the bed. The bed wetting wasn’t
mine, but later you’ll come along with it and find out why.
Nightmares…?
What’s so special about nightmares you might think now… The weird thing is that
Stacey has got premonitions while she sleeps. Some years ago she had some
nightmares about a little girl and ignored it – than the little girl died just
as Stacey has predicted in her dreams. Now she is having nightmares about her
best friend Drea, who’s become the target of one seriously psycho stalker. It
all started with weird e-mails and freaky phone calls.
I don’t
want to tell too much, coz you’ll have to read the book yourself and find out
if she’s able to save her best friends life. But if you love Wicca and mystery
you don’t want to be disappointed with this chick-lit teen-thriller!

About the Author:
Laurie
Faria Stolarz was raised in Salem, Massachusetts, and educated at Merrimack
College in North Andover. She has an MFA in creative writing and a graduate
certificate in screenwriting, both from Emerson College in Boston. She currently
teaches writing and French, and is working on the sequel to Blue is for Nightmares. Visit her
website at www.lauriestolarz.com.
Kategorie: Bücher | Books7. Oktober 2012Kommentar hinterlassen
Schlagwörter: JugendbuchLaurie Faria StolarzLlewellyn PubRezensionThriller
Teile diesen Post
Share on FacebookShare on Facebook TweetShare on Twitter Share on LinkedInShare on LinkedIn Pin itShare on Pinterest Share on WhatsAppShare on WhatsApp 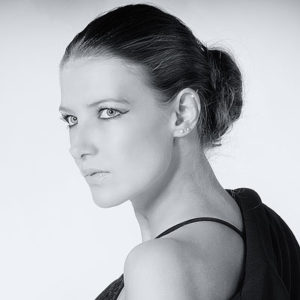